Huayna Potosi 6088m is Bolivia ’s most popular major peak in the Cordillera Real. Located at just 25 km from the city of La Paz, Huayna Potosi is known for its ease of access and imposing beauty as well as the fact that it is 88 meters over the magic 6000 meter figure.

Huayna Potosi can be climbed by beginners with a competent guide and technical equipment. Beginners yes, but fit beginners; it’s quite steep toward the end and it’s a tough climb, but well worth the effort!

Our two day itinerary does not include an afternoon of basic mountaineering instruction and a night of acclimatization at the 4700 meter base camp level, both of which increase your chance of summit success.

We suggest 3 day climbing Huayna Potosi, if the customer does not have good acclimatization and be good physicaly.

Huayna Potosi 6088m climb is for all the people who would like to climb over 6000 meter without high knowledge mountaineering techniques.

Climbing Huayna Potosi is physically demanding, as the high altitude.

For that reason is recommended for who will climb it. Has a good fitness and acclimatization,  becasuse it will make the climb easier and more enjoyable.

As its high altitude, it is constantly cold all year round, with temperatures dropping below 0 degrees celsius. Most of the time is around – 10 degrees during the climb.

For that reason is recomended to climb with suitable equipment.

The best season to climb Huayna potosí is between May and November, as this is the dry season in Bolivia, and will ensure optimal climbing conditions.

As it is a mountain with a higher demand, it is climbed all year round. including the rainy season (choosing the best days to climb).

Obviously, the success rate is less in the rainy season. Because the climb is more hader  with layers of fresh snow and sometimes with bad weather condition can not be Summited.

Most of the people climb the Normal Route (the north Summit 6088m.) for its  ease of Access and.  Ascend and descend is on same route.

From high camp  to Summit, the ascend usually lasts between 5 – 6  hours and  descend from Summit to high camp between 2 – 3  hours.

Huayna Potosi  offers tecnical routes too. As  french route, west face,  integral  for who is looking for an extremly challenging  route.

Our day will begin very early. Wake up time will be around midnight and we will get dressed with the climbing clothing and equipment and have breakfast.
Around 1:00 AM we will begin the ascent. We will have short breaks to rest and eat chocolates and drink water during the ascent.
We plan to arrive at the summit around sunrise in order to appreciate the wonderful view of the highlands, the surrounding Cordillera Real, Lake Titicaca, and the ever unique sunrise itself.
Our descent to high camp will take 2 – 3 hours and upon arrival we will have vegetable soup and hot drinks. At the high camp we will re-pack our backpacks and make the 1 hour descent to base camp.
We usually arrive at our office in La Paz. between 1:00 pm. and 2:00pm 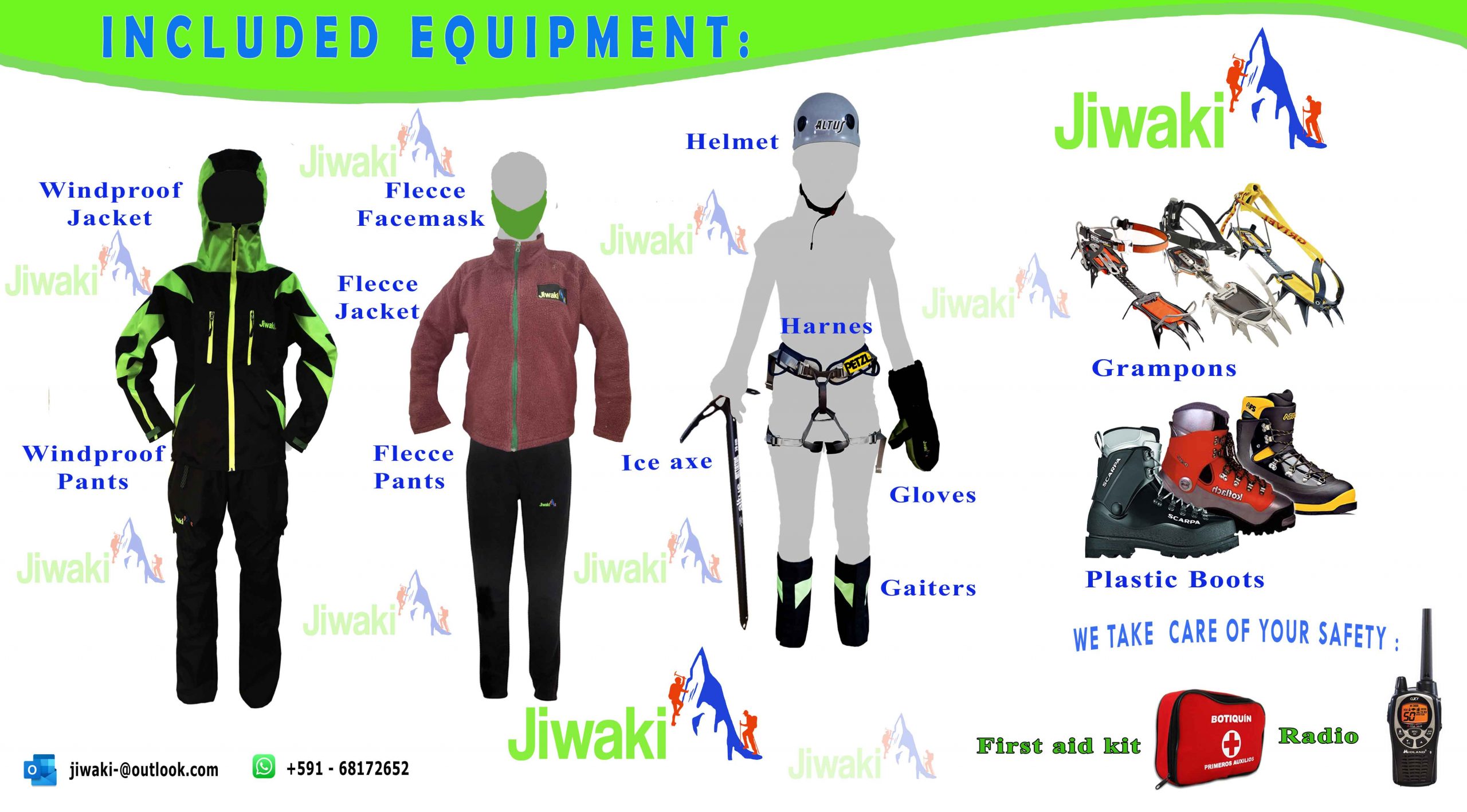 To make easier, we prepared a list of essential things to bring for climbing Huayna Potosi:

During the climb, we spend a night at Lodge / Refuge:

Made of stone.  groove floor, walls protected with plaster and wood to contain heat. Also this refuge has a shared room for customers and a separate room for guides, ecological bathroom.

Gear fitting is usually done the day before the start of your trip. At our office betweem 10:00 am to 18:00pm, where you will try clothing and doublé boots to make sure you will get right zise.

At that time, we will help you with  all your enquiries or questions that you got.

NOTE: in case you do not have place where you can  store your personal gear during the trip.

Always we have space at our workshop where you can leave your personal gear during the trip also we can lend you  a bag to store it.

Maybe you got some mountaineering chothing by your own, bring them you can use during the tour.

In case you do not know what to bring for trip,  from your personal gear like clothing, just bring everything  that you got and at our office we will help to chose the right gear or clothing.

Just to let you know also you can store thing that are not necesary for the climb at the lodge of Base Camp and pick them up on way down.

From $120
per Adult
Need help with booking? Send Us A Message